“Done to Death” kills it 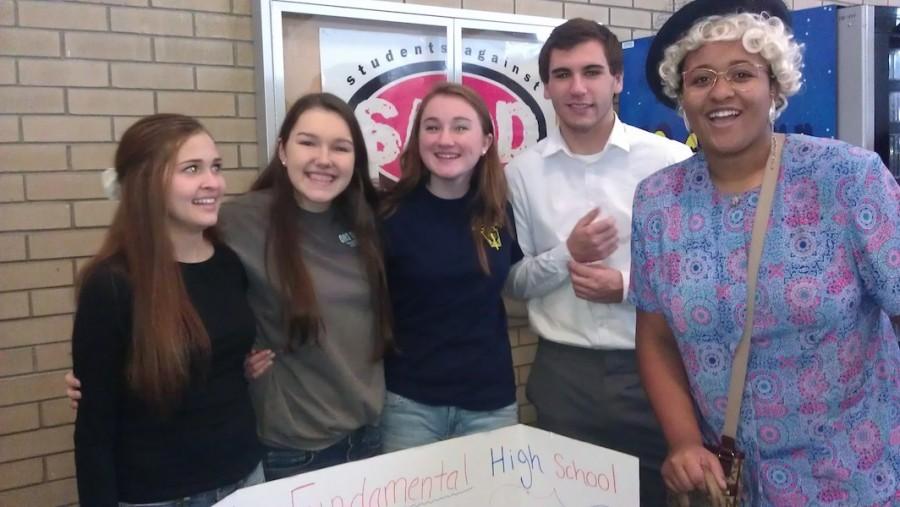 The show must go on... Actors from the play "Done to Death" answer questions about the drama department at Saturday's high school fair.

A record number of students, teachers, administrators and family members packed the seats in Osceola’s auditorium last night. According to Mr. Pace, drama teacher, 450 attendees watched the drama department’s fall play, “Done to Death.” Two hundred made up Thursday night’s crowd.
Pace was so confident in his student actors that he actually sat in the seats to observe Friday instead of overseeing the production back stage. “Watching from the audience is a real treat,” he said.
Others agreed. “I thought it was delightfully funny and I am blown away by how well they memorized their lines,” said Mrs. Mowatt, Assistant Principal. “Their set design was perfect for the play and the cast had a professional level of performance.”
Devin Hill, 11th grade, liked what he saw. “Very funny.. I laughed a lot.” Andrew Regar, 12th grade, said, “I thought the play was very entertaining and I was impressed by how Mr. Pace pulled it all together.”
Mrs. Colton, history teacher, had a unique perspective. “I thought it was great fun, and as fellow thespian, I love seeing people having fun and ‘playing’ on stage.”
Mar, 12th grade, said, “It (the drama department) really made a turnaround this year. The actors were really impressive.” Another student was intrigued by the plot.
Isis Climes said, “It kept me guessing about who was the killer.
The final performance is tonight, and several students can’t wait to see it. Rebecca, 12th, Monica Fehr, 12th, and Stephanie Zagorski, 12th, said they’re excited to see students on stage, including Rebecca Hazners.