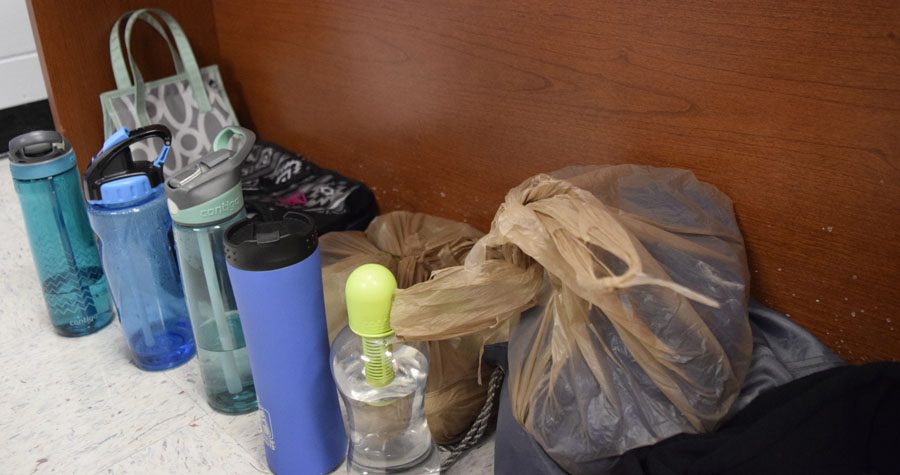 Water bottles and lunch boxes are some of the current items in student services' lost and found.

Wondering where all your water bottles, sweaters, and that retainer you’re always losing is? Wonder no more! Ms. Nolan probably has it in the lost in found. (Unless it’s your retainer; she threw that away.) Lost and found is located in the front office in student services. Head there if you ever realize any of your precious belongings are missing.

Ms. Nolan says, “Items are brought to lost and found usually around twice a week.” She has an area in her office where she keeps all the returned items and students can come in and retrieve what is theirs. “Most common items that are brought in are clothes, calculators, and phones.” Ms. Nolan explained, “There are always items that get picked up immediately, and some items that stay here forever. Students come for their cell phones as soon as they realize they’re missing them. On the other hand I’ve has calculators collecting in my drawer for years.” Items are left “unfound” in the lost and found for a while, but if they’re never retrieved by their owner, Ms. Nolan finds a place for them to be donated. “All clothes are given to Goodwill after a semester goes by without finding their owners. Any other items that can be donated at the end of the year are. We find good uses for everything that’s never found.” Having clothes, bottles, and cell phones turned in unfortunately isn’t always the case for Ms. Nolan. “The most bizarre thing ever turned into me is a retainer… it was very gross and I made sure I never touched it. I actually only help onto it for a very short time before it was put in the garbage.” So don’t think that whatever you’re missing isn’t in the lost and found; there isn’t much Ms. Nolan won’t hold on to.

“Leaving my phone in the lunchroom and realizing it was not in my pocket the next period had to be the scariest moment of my life,” Osceola senior Cole Martini stated. “I went straight to Ms. Nolan’s office and to my surprise, it was sitting right in her office waiting for me.” Many Osceola students have had to take a trip to lost and found in their years at Osceola. “I have a problem leaving my jacket places. I have ended up picking it up from the lost and found more than once this year,” Shane Samis explained.