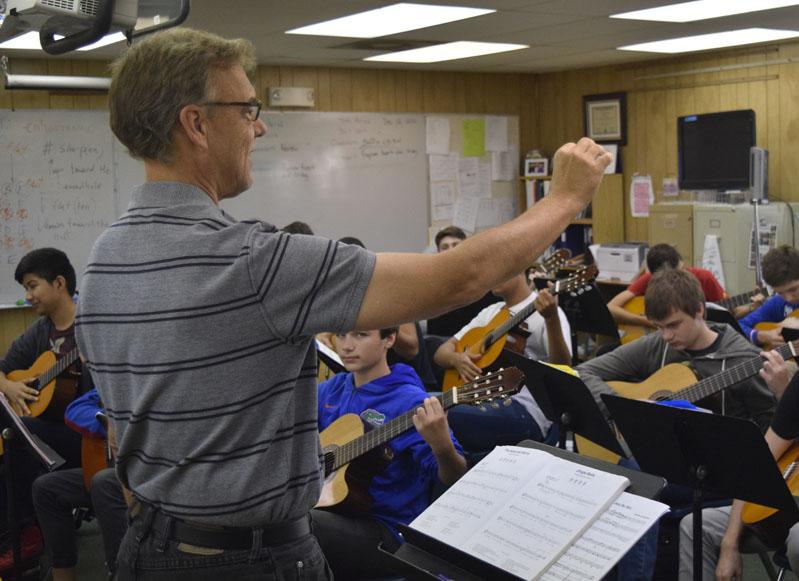 Mr. Campbell rehearses with his students for the concert.

Guitar teacher Mr. Campbell has been working hard towards getting his students ready for their winter concert this year. The concert is on December 8th in the auditorium and is free. Anyone is allowed to attend. Guitar students are taking the opportunity seriously. “We rehearse all class. We play all the songs we will be playing in the concert to make sure we sound as good as we can for when the day comes,” said Mr. Campbell.

The Guitar Concert is going to have all of Campbell’s guitar classes featured. “We have the beginner guitar groups, the advanced guitar groups, and then we have the rock band that will be playing in the concert. The Rock band are students that meet after school to play rock music instead of the classical music we play in class.” Says Mr. Campbell. Since it’s a holiday concert, a lot of different kinds of holiday music can be expected to be heard. “We have a mixture of holiday music. Some of it is classical and some of it is contemporary – like what the rock band will be playing.” Mr. Campbell explained.

Students are excited to show off all they have worked towards so far this year. For many beginning guitar students, they came in the class knowing nothing about playing the guitar, and now are able to make music to be performed at a concert. “The first thing we learned in class was how to play chords. Then we learned how to play notes. We use chords and notes to make sounds that go together to make all the music we will be playing in the concert.” Says senior Megan Welch.