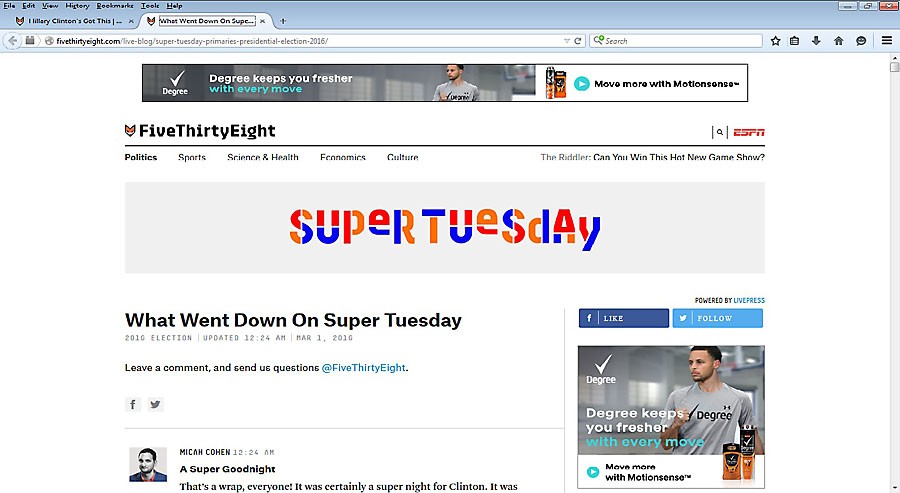 According to FiveThirtyEight.com, The next few weeks will be vital for the Republican primaries.

March 1st was an eventful night. On the date known as ‘Super Tuesday’ in election circles, 13 states and one U.S. territory held primaries or caucuses to determine which candidate each state’s delegates shall support at the national convention this summer. Of those states, Alabama, Arkansas, Georgia, Massachusetts, Oklahoma, Tennessee, Texas, Vermont, and Virginia held primaries for both parties, Colorado and Minnesota had caucuses for both parties, Alaska and Wyoming are only holding Republican caucuses, and the territory of American Samoa is only holding a Democratic caucus. According to CNN, business mogul and current Republican frontrunner Donald Trump won 7 states, Texas Senator Ted Cruz won 3 states, and Florida’s own Senator Marco Rubio won 1 state. On the Democratic side, former Secretary of State Hillary Clinton took home 7 wins, while Vermont Senator Bernie Sanders got 4 wins.

With the biggest day of the primary season now past us, the race for president has been solidified, and we can begin to foresee which candidates will win the Republican and Democratic nominations. While Trump may have been the Republican who won the most, as polling and statistics analysis site FiveThirtyEight explained, Trump’s performance was not particularly spectacular, and mostly aligned with previous predictions of his showing on Super Tuesday; Marco Rubio’s poor showing was a big blow to his candidacy, while Ted Cruz’s surprising 3-state win ensured his campaign would live to see another day. With Ben Carson having basically announced his presidential run is over, the presidential race is down to four: Trump, Rubio, Cruz, and Ohio Governor John Kasich. With Kasich also failing to win a single Super Tuesday contest, it is extremely unlikely he can win the nomination. Thus, for all intents and purposes, the race is down to Trump, Rubio, and Cruz.

With Hillary Clinton now highly likely to win the nomination, according to FiveThirtyEight’s analysis, the question Republicans should now be asking (and some already are) is: Which candidate can beat Hillary Clinton? And, with the way things are going, the only candidate that has a solid chance of doing so is Marco Rubio.

Polls and analyses have been done on the subject, and so far, they do not look good for Trump and Cruz. First, as Nate Silver of FiveThirtyEight explained, Donald Trump is extremely disliked among the American electorate in general, having the highest unfavorability rate of any other candidate. Polling by RealClearPolitics also shows this; of the 5 polls RealClearPolitics used, 4 of them show Clinton beating Trump in a hypothetical head-to-head matchup, with Clinton’s lead being outside of the margin of error (MoE) in 3 of those polls. While RealClearPolitics’s polls show Cruz ahead of Clinton in a hypothetical general election, these results should be taken with a grain of salt, as all of these polls except one are within the MoE. In addition, Cruz is highly unpopular among the prominent Republican establishment (perhaps even more so than Donald Trump), which raises concern over whether Cruz as presidential nominee could gain enough support from donors in order to fully fund a strong campaign. However, Rubio would be strong as a nominee because, as FiveThirtyEight explained, he scores well among key demographics like White women and independents, and unlike Cruz or Trump, Rubio hasn’t done or said anything particularly notable that Democrats could use to discredit him (with the possible exception of the “Robot Rubio” incident, where Rubio repeated almost the exact same line 4 times in one debate). RealClearPolitics polls also strengthen the case for the 44-year-old Floridian, as they show Rubio leading in all 4 polls that pit him against Hillary Clinton, with all of those leads being safely outside the margin of error.

As of now, the Republican Party may be facing a crisis. While Trump is “barely on track” to win the nomination according to FiveThirtyEight’s analysis, many are unsure if Trump can win the general election to become president. As of now, Rubio is not predicted to win Florida or Ohio, which both have primaries on March 15, and Marco Rubio performed poorly in the recent Super Saturday primaries and caucuses. Republican elites could change the convention rules at the last minute to hand Rubio a victory despite his lack of popular support, but that could lead to a backlash that could strengthen Trump and cripple the Republican Party, either causing Trump supporters to shift their support to a third-party candidate (who may or may not be Donald Trump himself), or to simply stay home on Election Day.

If the Republicans want to win in 2016, Marco Rubio needs to win fair and square. To that end, some Republican donors have begun running anti-Trump ads in states like Florida and Illinois, seeking to weaken the frontrunner’s support and make it easier for another candidate (preferably Rubio) to emerge victorious in those states’ primaries. The next couple of weeks will be crucial, and Republicans should pray that the Senator from Florida can perform a miracle and take the nomination away from the man in Trump Tower.