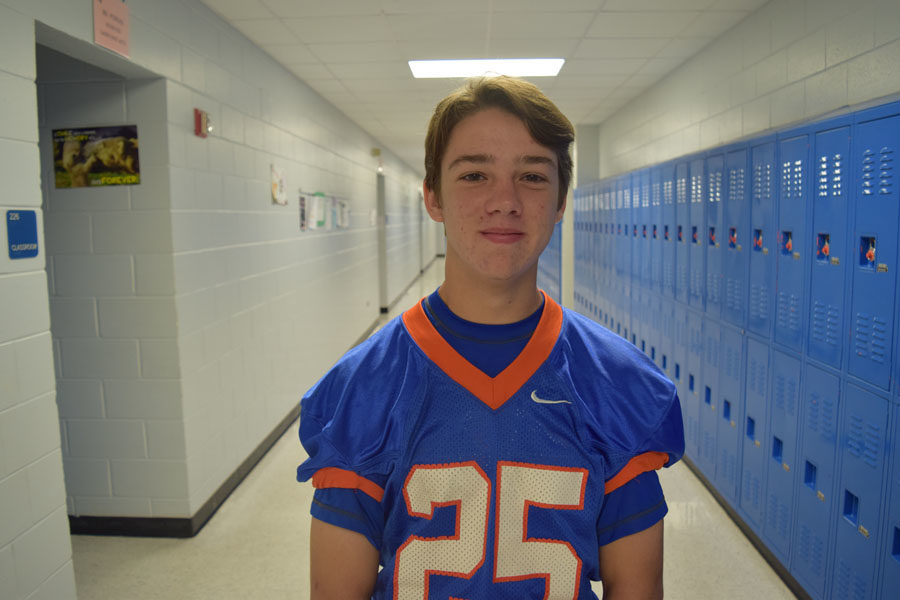 Sophomore Justin Syers is ready for the match up this week against Pinellas Park.

Friday, the Varsity football team entered their second game of the season with a match up against the Dunedin Falcons. With that victory, his team won for the first time this school year 21-13. A late fumble by Dunedin ultimately sealed the deal for the Warriors, causing one of the best fan reactions that I’ve ever seen.

But the Warriors are keeping their heads out of the clouds, said Offensive Coordinator Coach Daniel Smalley. After the team’s loss in their first game of the season, Coach Smalley said, “We need to stay better focused in games… with penalties hurting drives and turnovers ending them, we need to focus better and not make mistakes.” Coach also liked what he saw from the new playbook, saying “The playbook definitely helped move the ball around… We saw opportunities in the passing game we haven’t seen before”. With these new opportunities we could really see a passing game that hasn’t been at all present in years past.

Sophomore Justin Syers agreed. “It’s all about starting fresh every week, wanting to win every game one by one.”  Syers also thought the playbook did nothing but help the team. “It opened a vertical game that wasn’t there before… I saw improvement.”

Freshman Maikeli Tuinakovandrua was just happy to be on the team. “I’m just happy to be here… I want to help in any way possible.” The Warriors have a tough task ahead of them this Friday as they play the Pinellas Park Patriots, 7:30 at Osceola.