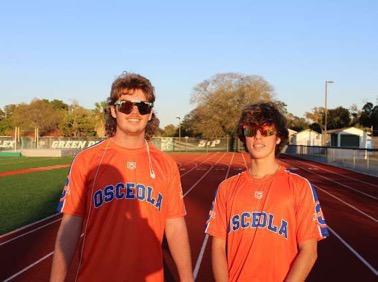 Tyler and Dillon Secor take a quick picture at St. Pete High School before the game on March 25th

Both boys and girls Osceola lacrosse teams had their senior night on April 12th against Boca Ciega High School. Both the boys and girls team won. The seniors of both teams said that they both had many great memories with their team this season.

Osceola senior Brooke Bello said, “My favorite moment was when we beat Northeast in overtime”. Brooke says that the team was really excited and it was a memorable moment.

Tyler Secor said, “My favorite moment was when we beat St Pete High School 18-8.” Tyler says that it was an important game and he played well that day. Tyler’s best accomplishment his senior year was when he “recovered from knee surgery and played the whole season.” Tyler says that he has been through a lot of pain with his knee, but was just happy that he was able to play his last season at Osceola.

Tyler and Brooke said that they both had a great last season especially with winning their senior nights.